Review: Reign of the Fallen 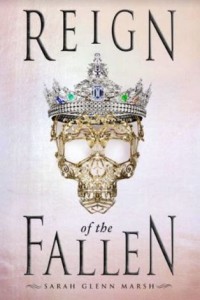 I received a copy from Penguin First to Read.

I finished this in December last year and I’m still struggling to put to words how to review it. I sort of liked it, I loved the diversity of the characters. This was one of my most anticipated January releases, but the actual book itself? Even after well over a month later I’m still undecided.

I think my biggest issue with it was the whole the dead rule the world thing. In this novel you have a kingdom where Necromancers are the most powerful mages and when dead nobles die, it’s their job to go and retrieve their soul so the person can keep living and ruling as they have done. Maybe I’m getting too cynical but I’m struggling to grasp this concept. Mainly because from this reader’s point of view – it doesn’t teach anyone how to deal with the concept of death. Particularly the ruling class. Even their king is the living dead. I don’t get it.

Best thing I loved about this book was BISEXUAL LEAD FEMALE CHARACTER!!!

The novel starts with the lead female Odessa and her best friend/boyfriend Evander about to receive their commendation as official members of the Necromancer’s guild. As full Necromancer mages they can live in the palace and lead comfortable lives. Odessa sort of secretly wants to see the world, and you get the impression she thinks that Evander did too. Odessa has a friend (lady pirate) with a ship who can offer a passage out into the wider world. However, it’s forbidden to leaving their secluded comfortable little kingdom, even though the royals are mostly wise and seemingly well-liked and respected and everyone seems pretty comfortable. At least on the surface. There’s always going to be problems hidden in a kingdom like this which is never obvious to the people whom it should be. Which should raise questions as to why no one is ever allowed to leave. Why do the dead have to be brought back over and over? (There may have been an answer in the book I just can’t remember it).

The risen dead have certain rules to live by and there’s consequences, things can take a drastically bad turn and the risen dead can become murderous monsters known as Shades. On a seemingly routine job the kingdom princess Valoria accompanies Odessa and Evander and the reader gets their introduction into the land of the dead and the way things work.

Only a short time after the task is done there is a shock death. A loose Shade on the rampage. Odessa starts to question things about her relationship with Evander. The mystery in the dead lands is progressing, the Shade attacks are getting more frequent.

Early on in the novel there was a really surprising twist I would never have guessed at.

The characters were great, I loved them all. A+ for diversity, a lesbian couple, a gay couple, and a bisexual lead female. The characters were well fleshed out, their emotions and actions believable. Though I did feel that Odessa could be a tad over dramatic.

That being said, in the aftermath of an unexpected tragedy she falls apart. She breaks down. Completely understandable, but she also develops an addiction to a pain numbing tonic rather than dealing with the harsh reality and emotions. There was something very uncomfortable about this. I do understand and logical that it’s so much easier to give into an addiction rather than deal with the feelings when faced with something horrible.

I did find the pacing of the novel very slow, something would happen and then it would emotional turmoil and meandering and seemed like ages before anything else would happen. There didn’t feel like a whole lot of action going on. The second half of the novel picked up a bit, a new character is introduced who comes across as quite antagonising for Odessa and gives her more of a challenge, a new lead into the investigation into the increasing Shade attacks sets of a new direction which breathed more life into the novel. Also hinting at the possibility of a new romance angle as well. The character is mentioned in passing a few times earlier in the novel and comes in with her own agenda but finds herself becoming part of Odessa’s investigation.

Meredy is a Beast Master, she can control animals as well as being a Necromancer. She’s smart, sassy and not afraid to call Odessa out on her bullshit. She doesn’t follow blindly, though she has some pretty misguided ideas of her own necromancy when she makes her appearance. She provides a good counter balance to Odessa.

When the force behind the Shade attacks is finally revealed there was a bit of eye rolling why didn’t I see this coming from a mile away? Kind of amusing in a way, should have been fairly obvious but actually it was quite clever that I never managed to figure out the twist to see it coming.

While some of the novel I found slow and boring it did have its moments. I didn’t get some of the magical concepts. There were some of it I liked. It was certainly interesting and creative and not a fantasy type I’ve seen done a hundred different times. So plus points for uniqueness. I did buy a finished hardback, I may have to read this again at some point before the next one comes out.
fantasy magic YA Books lgtb penguin first to read read in 2017 flights of fantasy 2017
Tweet