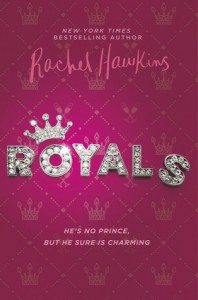 I received a copy from Penguin’s First To Read

This book was like a giant rom-com cliché. The alternate history for the Royal family was eye rolling and cringe worthy. That being said once you over look those things, it was actually a very entertaining read. Irritating as hell, but fun.

In this alternate world there is a Scottish Royal Family, and the heroine Daisy’s sister Ellie has fallen in love with Prince Alexander, heir to the throne. They are getting married. Daisy lives in Florida with her mom and her ex British rock star dad. She lives a pretty normal life. She has a part time job at a local convenience store and is looking forward to a planned trip to Key West with her BFF Isabel where they will go to a convention to meet their favourite fantasy author and get their books signed. All pretty normal.

But all this is thrown out of whack when Ellie announces she’s marrying the prince and the Royal family have invited the whole family to Scotland for a few weeks for the summer to get a taste of what’s coming.

Every other chapter is a page from a magazine or a gossip blog/tabloid.

Daisy is fuming but agrees on the basis that the Royal assistant Glynnis who has come with Ellie and Alex can arrange for a singing at a book shop near where they are staying and bring Isabel along later.

So off to Scotland they go given a Royal treatment – first class flights, fancy cars, the fanciest hotels. To add to the chaos, Alex’s younger brother, charming, Sebastian (who is Daisy’s age, 17) the most eligible teen in Scotland is there as well with his group of fancy friends. Sebastian is an ass, crude, full of himself and flirts with everything in a skirt. Daisy finds herself getting into a snit with his best friend Miles when a drunken Sebastian decides to head into her room.

The dialogue is sharp and witty and as soon as Miles and Daisy start snarking with each other it’s completely predictable as to what’s going to happen. Daisy has to go to several royal events and dress the part (something she’s not happy about) and of course things go eye rollingly wrong (including a rather amusing incident where she finds herself getting looked down on by some of the posh women and does a delightful job of holding her own and insulting them right back).

It’s cheesy as hell. However, at the time, I did find myself reading this with a grin on my face most of the time. Daisy is struggling to cope with major culture shock, even when her best friend finally arrives (Isabel’s huge crush on Sebastian not helping) Daisy finds herself unwittingly creating a scandal that catches the eye of the disapproving Queen. And Miles to the rescue.

Which leads to a fake dating plot.

As a lead character Daisy was immensely likeable, easy to understand where she’s coming from. Easy to follow her story as she moves between the very different world and gets to know the real people behind the tabloid gossip and learns maybe Miles isn’t the stuck up ass he pretends to be. They have some quite interesting conversations about their differences.

The end is absolutely gag worthy. But kind of works.

Not the most brilliant book I have ever read, but certainly an entertaining one.